On March 29, 2018 - a pelagic out of Tofino from The Whale Centre found a single Parakeet Auklet at an ocean depth of 515 ft in pelagic waters, offshore from Tofino. An exact GPS location of the bird was not taken. It sat on the water briefly before taking flight and disappearing out of sight.

The bird was found and photographed by Joachim Bertrands. 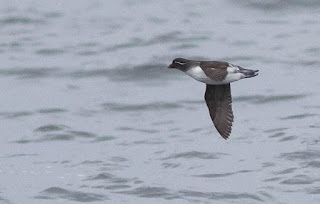 This is the 43rd record for the province of BC.
Posted by Melissa Hafting at 3:23 PM No comments: Links to this post

At 9am on March 24, 2018 on a pelagic trip out of Tofino on Ocean Outfitter's "Miss B. Haven," 13 birders saw three juvenile Short-tailed Albatrosses, one of the birds was banded and after photo review a partial band number was visible. We sent in the band and the researchers said he was banded on April 24, 2017 as a chick at Tori Island, Hachijo, Japan. His full band number is 13D9932.

The first Short-tailed Albatross was spotted by Mike Toochin and all birds were found on Clayquot Canyon with 400 Black-footed Albatross behind a trawler.

The birds stayed with the boat in close proximity (as close as 10 feet away) and allowed for great photos. The birds were present for the full 5 hours the birders were at the canyon.

This is the 45th record for the province of BC.
(the actual number of sightings is likely higher than what is reported by birders).

Posted by Melissa Hafting at 8:27 PM No comments: Links to this post

At 2:15pm on March 12, 2018, Neil Robins and John Purves found an adult male King Eider in breeding plumage. The bird was in a large raft of scoters near to Bluffs Drive in the Eaglecrest Area of Qualicum Beach. They viewed the bird for an hour by scope. They were unable to photograph the bird due to distance.

The bird was relocated by Guy Monty et al. on March 13th at the end of Whitmee Rd and is being viewed as of 6:30pm. A scope is required. From March 18th to 22nd, the eider was relocated further north at the Little Qualicum Estuary and could be viewed from the beach access at the east end of Surfside Dr. The bird was seen on March 23rd from the end of Buller Rd, which is just south of the previous location - a map of the location can be viewed HERE.

The bird was seen at the original location at the end of Whitmee Rd on March  26, 2018.

*On April 2nd the bird continued at the end of Seacrest Place in Qualicum Beach.*

This is the 37th record for the province of British Columbia.

Posted by Melissa Hafting at 5:50 PM No comments: Links to this post