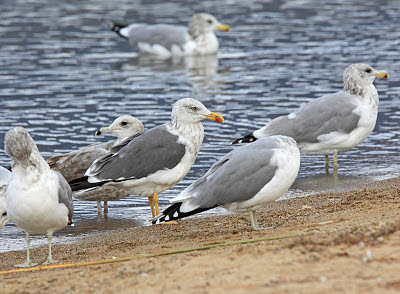 [Photo: Laure Neish]
For nearly a decade, a single adult Lesser Black-backed Gull has called Kelowna and Vernon its winter home. This bird (assuming it's the same one each year) typically shows up in the first week of November and stays until late March before departing to an unknown breeding area. In addition to this bird, there have been at least 4 other individuals (if not a few more) that have shown up in the valley. The easiest way to know there are more than one individual is when birds of different ages pop up. In this case, Laure Neish found an adult-type on Oct 22 along the Okanagan Lakeshore in Penticton-- it's still a little early for the usual Kelowna bird but who knows?

It was seen again today by Laure so maybe it'll stick around a bit longer in case anyone wants to have a look at this sharp-lookin' creature.

Click HERE to see more of Laure's photos of the bird.
Posted by Russell Cannings at 12:18 PM No comments: 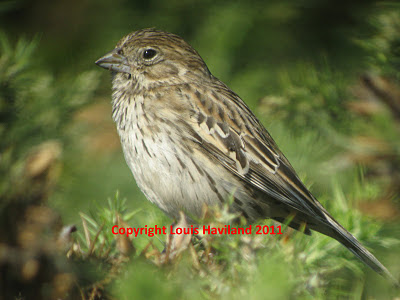 From Louis Havelind (Oct 16)--"It was about 50 m to the West of the main beach pull off area with the noticeboard, in the small pull off area at the start of the trial that leads through the forest toward the river. It stayed in the bushes around the concrete blocks that stop vehicles from going down the trail. This is not the beach side of the road and if you get to the camping area you have gone too far.

OCT 17--seen and photographed again along the beach and in the parking lot above the beach,
associating with Savannah Sparrows.
Posted by Russell Cannings at 3:53 PM No comments:

PROTHONOTARY WARBLER in Vernon, BC!

Oct 10---Chris Siddle really has something to be thankful for this evening! While casually checking out a chickadee in his backyard (on Silver Star Road), a PROTHONOTARY WARBLER glanced off his window and perched briefly in plain sight. Unfortunately it did not stick around, and has not been seen since.

Will post updates if subsequent sightings occur.
Posted by Russell Cannings at 6:52 PM No comments:

LESSER BLACK-BACKED GULL AND ANCIENT MURRELET IN KELOWNA AND PENTICTON

Oct 3--ANCIENT MURRELET delights locals in Penticton (while Russell is away of course).
[Photo below by Laure Neish] 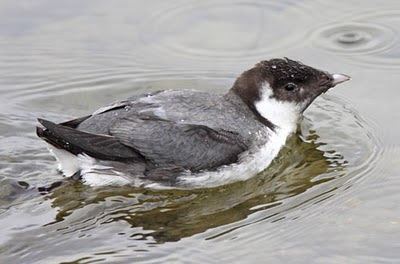 First located by Laure Neish near the Penticton Yacht Club, it was last seeing flying toward Redwing Estates near the SW end of Okanagan Lake. 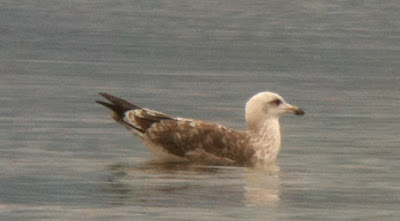 On Sep 18, Mike and Sharon Toochin observed a single MANX SHEARWATER 35 nautical miles west of Quatsino Sound (West cost of Vancouver Island)--this was from a cruise ship.
Posted by Russell Cannings at 2:08 PM No comments: