At 4:30pm on June 17-2017, Ted Ardley found a female Acorn Woodpecker at a feeder at his home near Aldersmith Park off Burnside Rd W and Meadow Park Lane near the Eagle View Elementary school.

The bird was viewed by multiple observers as of 6:05pm.

Directions: Park along Meadow Park Lane and walk to the end where you see a small round about and communal mail box.This is one of the entrances to Aldersmith Park. Go to the right on the trail along a chain link fence and just a few yards in look over the fence at some feeders there in a stand of Garry oaks behind the trailer.

Map to where to park HERE

Please be respectful of private residences and do not walk on private driveways.

The bird continues in the same location as of August 26th.

This is the 10th record for BC. 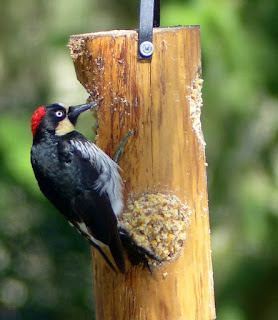 Posted by Melissa Hafting at 5:41 PM No comments:

At 6:15am on June 8-2017, Emily Williams and Emily Smith found a male Chestnut-collared Longspur, 2.5 hours north of Golden. The bird was on the east side of the Bush Arm causeway off the Bush River FSR near the south end of Kinbasket Lake. The bird was calling and foraging in the grassy area near black peat moss and driftwood. It flew across to the west side of the causeway but returned back to the east side. They observed the bird or over 20 minutes. Emily Williams relocated it and photographed it there at 9:15 am, the following day (June 9th).

The bird was not seen on June 10th.


Posted by Melissa Hafting at 9:09 AM No comments:

At 8:30 am on June 11-2017, Hugh Griffith, Margaret Butschler and Steffany Walker found a male Chestnut-sided Warbler at Terra Nova Park in Richmond during the monthly bird survey for the Parks Department for the City of Richmond. The bird was singing his "pleased pleased pleased to meet you" song and moving 10 m up through the line of Douglas Fir Trees between the playground with the climbing tower and the slough which is east of the playground. The bird later landed 10 metres away at eye level on a conspicuous perch allowing for great clear views for about 10 seconds. Hugh described the bird as having a bright white underside, bright yellow cap and a black moustache. He said it also had a bold chestnut stripe along both sides of its body. He nor anyone else was carrying a camera with them and therefore did not photograph the bird. The Terra Nova Adventure Playground is located at the end of River Rd before the dyke.

The bird was not relocated on June 12th, despite multiple observers looking.

This is the 66th record for the province of BC.

Posted by Melissa Hafting at 3:58 PM No comments:

On June 10th, 2017, Marie Revoy found and photographed an Ash-throated Flycatcher at Wilson Creek Estuary off Field Rd in Sechelt.

On the morning of June 11th, Arnold Skei relocated the bird at the same location. The bird was seen in small alders near the boat trailers. There are 2 man made ponds on the west side inside of a gated area. It was later seen in alder trees on the right side of the first pond with the most water.  It was silent the whole time he was present.

The bird was last seen in the same location as of 2:35pm on June 11th. It has not been relocated since.

Posted by Bridget Spencer at 11:31 PM No comments:

At 12:30pm on June 1-2017, Lev Frid spotted an immature Short-tailed Albatross during a pelagic run from the Whale Centre out of Tofino. The bird was 35 nautical miles SSW of Tofino in a flock of Black-footed Alabatrosses. Captain John Forde was able to obtain a photo of the bird, as it sat on the water. Multiple observers, who were part of an Eagle-Eye birding tour, were able to observe the bird until 1:15pm when it flew by the boat and disappeared.

Posted by Melissa Hafting at 8:02 PM No comments:

The FIRST record of a HOUSE SWIFT in the Americas was found in Delta, BC!


"UBC zoologists have documented the first record of a House Swift in the Americas—and begun to unravel the mystery of how the tiny bird got from its south-east Asia breeding grounds to Ladner, BC.“These birds are amazing fliers and can stay airborne for months at a time, but there wouldn’t have been enough insect prey to sustain him properly over the mid-Pacific. The mystery is what sent him so far off course.”

The bird’s well preserved but near-emaciated carcass was discovered in May 2012 near the Deltaport container terminal, just 40 metres from the Pacific Ocean.“Like some marathon runners, I think this fellow finally saw land and just crashed, exhausted, at the finish line,” says Ildiko Szabo, a curator at the Beaty Biodiversity Museum and forensic ornithologist who led the identification of the specimen.
“These birds are amazing fliers and can stay airborne for months at a time, but there wouldn’t have been enough insect prey to sustain him properly over the mid-Pacific. The mystery is what sent him so far off course.”

In a paper published today in The Wilson Journal of Ornithology, Szabo and co-authors, including UBC researcher Darren Irwin, propose that either a storm set the bird off course, or even more likely, his internal navigation ’compass’ malfunctioned.“Our initial reaction was skepticism that this would be such an unusual species,” says Irwin, who studies how new bird species arise. “But by combining a review of the bird’s characteristics with DNA testing, we were able to confirm that this was indeed a House Swift from Asia, making this an exceptional case of vagrancy.”

The prospect of the bird hitching a ride by ship or plane is unlikely, say the authors. Swifts don’t typically roost on ships, and the bird would have needed to be airborne to feed over at least portions of the journey. The near perfect condition of the swift’s feathers also indicates it wasn’t trapped in a plane’s wheel well.There were no indications of trauma, parasites, disease or oiling. But the 13-centimetre swift was very underweight, and had entirely depleted its fat stores.

House swifts (Apus nipalensis) range west to Bhutan, and as far east as Honshu Island, Japan. And until now, this species had never been found in the Americas. Other swift species from Asia have reached the Alaskan islands, and European swifts have occasionally successfully completed Atlantic crossings.The discovery is likely to excite birdwatchers and cause a cascade of bird list updates—the species needs to be added to the Greater Vancouver Area, British Columbia, Canadian and American Birders Association Area bird lists.

The specimen is currently on display at the Beaty Biodiversity Museum, Vancouver’s natural history museum.

Not only is this the first record of this species in the Americas, it is also of course, the first ABA and BC record.

You can watch a video below of Beaty Biodiversity Museum curator and forensic ornithologist Ildiko Szabo as she discusses the House Swift that ranged across the Pacific from Asia to Ladner, BC.