On December 22-2016, while doing the Comox CBC, Shane Tillapaugh found a Female type Red-flanked Bluetail at Lazo Wildlife Park. The bird was first found right beside the parking lot in the beginning of the row of trees on the right side of the parking lot. The ID was not confirmed at the time but several people looked for the bird since then.

On December 29-2016, the ID was confirmed when Guy Monty relocated the bird at 12:40pm. The bird was in the end of the same row of trees in some alders, that back onto agricultural land at Lazo Wildlife Park.

Art Martell, Nathan Hentze, Mark Wynja and Dave Baird got on this bird shortly after. The bird was seen clearly but briefly for very short periods of time, with long instances of no one seeing it, between 12:40pm and 2pm. The bird was extremely skulky, stayed low to the ground and disappeared frequently. The bird was calling and it was last seen in the trees where it was originally found on December 22nd, near the parking lot.

The bird then flew just before 2pm, into the forested area on the left hand side of the parking lot and was not relocated. The bird was not photographed.

This is the second record for British Columbia and Canada.

On December 30th-2016, the bird was seen in a willow tree that backs onto the agricultural field. The first sighting was at 3:50pm and the second was at 4:45pm. Both views were brief but clear. The bird was not photographed.

On Jan 1st-2017, multiple observers had good views of the RFBL from 12:20pm until 1:30pm. The bird was perched in the open in the same Willow it was seen in on Dec 30th and 31st. This willow is located down the embankment and backs onto the agricultural field (please see maps above). It called several times and then flew and perched in a salal berry bush by the service building near the parking lot and entrance. The bird was also seen feeding on the ground with Dark-eyed Juncos.

At 10-12pm on Jan 1st-2017, the RFBL showed well to the observers present. It  perched in the open in a cedar tree near the main parking lot and first bench. Good photos were finally obtained!

From 3:30-4pm on Jan 3-4th-2017,  the bird was visible to observers at the base of the alders at the end of the park (on the right hand side of the park, near the agricultural field) which is near the pond.

On January 5-2017, the bird was seen in the willow tree, hedgerow and along the fence on the private property that borders the agricultural field and park between 2:45-2:50pm as it flycatched. The bird allowed for good views and photographs.

On January 7th the bird was seen from 3:10-3:25pm, flycatching along the fence of the green private home that borders the agricultural field and park.

The bird continues in Lazo Wildlife Park as of January 8th. It was last seen at 11:50 am for 15 mins, as it flycatched under cedars to the right of the main path near the entrance of the park. It then flew to the fenced hedgerow that is down the embankment and then out of sight.

The bird continues in Lazo Wildlife Park as of January 10th.

The bird was last seen in Lazo Park on January 14th.

Despite multiple observers searching, the bird has not been seen since January 14th.

A video of the bird can be viewed HERE

Directions: Drive all the way down Sand Pines Drive (not crescent) accessed off Lazo Rd and park at the parking lot where the road dead ends.

The address of Lazo Wildlife Park is 968 Sand Pines Drive, Comox, BC 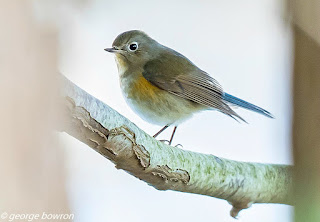 The gull was still present as of 4pm, close to the road and viewed by multiple observers with binoculars. Several people photographed the bird today, as it fed on earthworms.

This is the 3rd Black-headed Gull in the province of BC this year.

The bird was not seen on December 26th.

At 1pm on January 1-2017, the bird was seen once again at the south send of the turf farm.

The bird was last seen at the south end of the turf farm as of March 9th.

This is the 26th record for the province of BC.


Posted by Melissa Hafting at 9:54 AM No comments:

On December 18th-2016, during the Merritt CBC, Liis Jeffries found a male Lesser Goldfinch at a seed feeder and nearby birch tree with a flock of American Goldfinches at a private residence at 1721 Hill Street off Lindley Creek Rd. This feeder is located opposite to "Jackson's Welding"and easily viewable from the Rd. Liis was leading the CBC group and several observers got to see the bird.

The bird was seen again at 11:45am on December 21st-2016, by Alan Burger in the same location.This time it was by itself without the American Goldfinch flock and he was able to get some photos.

The bird was seen at 9:30am on December 22nd in the same location by Chris Charlesworth and at a nearby private home feeder on Dec 23rd.

At 11:25am on December 27th, the bird was last seen at Murphy Shewchuk's bird feeder at his private home on the south side of Merritt.

At 2pm on December 28th, the bird was seen at the original location 1721 Hill Street. It was feeding on the catkins of a birch tree in the front yard.

When attempting to view this bird please stay off private property and view the bird and feeder from the street. Please be respectful of the private residence.

On Jan 27-28th, the bird was seen once again at the feeder at 1890 Hamilton Ave. This location is open to the public and viewable up the driveway from the road.

The bird has not been seen since January 28th. 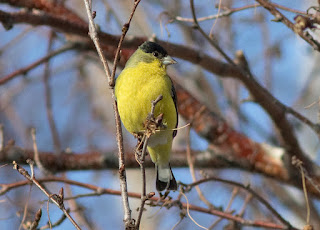 Posted by Melissa Hafting at 7:54 PM No comments:

On December 3-2016, Daryl Henderson and Annette Bailey found a Brambling at their home on 7th Avenue, near China Creek Rd in Port Alberni. Over the days that the bird was present, it would only appear for a few minutes at a time. They have not seen the bird since December 5th, when Daryl took the photos.  The bird was always associating with Dark-eyed Juncos and 3 White-throated Sparrows. If the bird returns, the homeowner will be fine with people coming to look for it, as long as people let him know in advance. However, it has not been seen since December 5th. If the Brambling returns, I will update on how the homeowner will like to arrange visitation.

On December 9th-2016, Andy George observed an adult male Hooded Oriole coming to feed at his backyard hummingbird feeder near 120th St and 96th Ave in Surrey. The bird was present all day and he was able to get some photos through his window.

The bird returned on the morning of December 10th and was present on Dec 11th.

The home is not open for public viewing.

The bird has not been seen since Dec 11th.

This is the 22nd record for the province of BC. 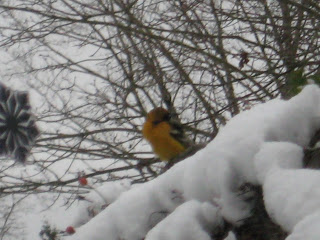 Posted by Melissa Hafting at 5:03 PM No comments: