At 3:45pm on February 10-2021, Jody Wells found a Redwing associating with American Robins near the playground at Hamsterly Beach at Elk Lake Regional Park in Saanich. The bird was described well and Jody has seen this species before in Victoria. Jody viewed the bird (that was on the ground 50 feet away from him) with binoculars but before he was able to get a photo, the bird was flushed by a passerby.  The bird was not relocated that same evening by Jody or by several others looking.

Map to location of where the bird was seen HERE

On Feb 11th-2021, the bird was relocated in the same general location HERE on the grassy area just west of the playground. It was viewed by several observers and photographed.

This is the 4th record for BC.

***There is a public health order now in effect restricting non-essential travel from your local health region to anywhere in the province or elsewhere in Canada. It also requires you to limit those you gather with to 10 people. You can read it HERE*** 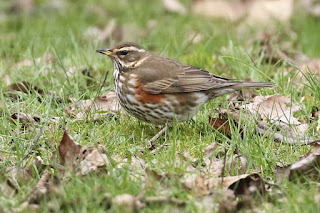