Press Release---
A brown pelican is being nursed back to health in Prince Rupert after veering almost two-thousand kilometres off course. The large bird with the nearly two metre wingspan was spotted, disoriented and wobbly, on a Port Edward dock earlier this week, far from its usual northerly limits along the Oregon coast. Prince Rupert Wildlife Rehab Shelter volunteer Amy Maund says people had been tossing fish to the pelican, so it wasn't starving, but an examination has revealed some eye and head injuries. The feisty pelican has perked up, since then, and is now preening and snapping his beak while shelter officials try to figure out why he ventured on his unexpected northerly adventure.
Posted by Russell Cannings at 12:15 PM 1 comment:

MOTTLED PETRELS in BC Waters

Ryan Merrill (Of "Mission to Haida Gwaii 2011" fame) just returned from a NOAA research cruise, and reports seeing three MOTTLED PETRELS in BC Waters (off Carmanah Pt, BC). This was around March 3rd, 2012. Here are the other highlights--- 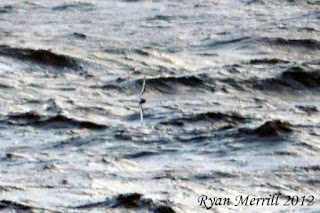 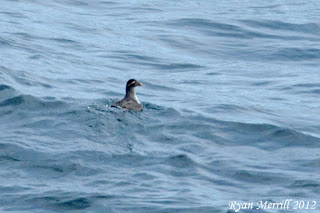