Update: It has not been relocated since March 30th.

On Feb 9th, Chris and Sandi Buis relocated what they thought was the Lesser Goldfinch at the same location. The bird was seen again by Rick Toochin on Feb 11th and the ID was confirmed.

On Dec 30th, Rick Toochin and Chris Buis found a female Lesser Goldfinch at his feeders behind his hotel "The Brooksisde Inn" at 2379 Chardonnay Lane in Abbotsford. The property is open to the public but please do not point bins or camera lenses at the hotel windows which could disturb hotel guests.  Also remember to keep your voices down when visiting the property. The bird is actively feeding at various feeders at the back and sides of the property and best viewing is from the grassy field in behind the property. On Jan 8th a Common Redpoll was seen feeding alongside the Lesser Goldfinch.

On Dec 28th,  Patti Matsushita found a remarkable bird at her backyard feeder, a Brown Thrasher and her husband Mas was able to photograph the bird, which is continuing as of April 8th.

The yard is open to the public at 1100 Cottonwood Street in Revelstoke.  Best times to view the bird when it is usually actively feeding, are between 11:00 am and 2:00pm (PST). As always when visiting private property please be respectful of the owners' property and surrounding neighborhood.

This is the 38th record for the province of BC.

The bird has not been seen since April 8th.

Posted by Melissa Hafting at 6:51 PM No comments:

On December 21st, John Findlay found an Immature Male Indigo Bunting at his backyard feeder. The bird was seen in a mixed flock of Dark-eyed Juncos and various Sparrows. Since then, the bird has been steadily returning to his feeder including on Dec 25th.

The home is not open to the public.

The bird was last seen on December 25th. 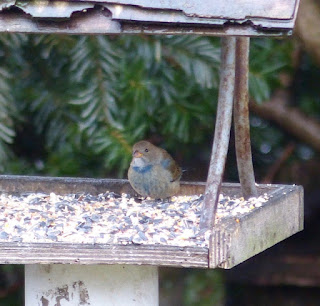 Posted by Melissa Hafting at 3:40 PM No comments:

On December 19th during the Victoria CBC, Nathan Hentze and Mike Davis found a Redwing at about 13:45. The bird was first in a vacant lot on the east side of South Valley Dr. in Victoria (off of Wilkinson, near Victoria General Hospital). It then flew to the west side where another vacant lot is, and disappeared potentially into a large cedar tree. The house closest to these lots is 3940 S. Valley Dr. *Note that if viewing this area on Google Maps, south valley drive ends on both sides of these lots, and it shows up as a dead-end. This has since been paved, and the road now connects through. However, this gap on the map is exactly where the vacant lots are located. Some google earth maps of the area can be viewed at: https://volantbc.wordpress.com/2015/12/19/seeing-redwing/

The road is relatively narrow here. Please do not park directly across from another parked vehicle as this may prevent service vehicles from getting through. There are several pull-outs on the road for visitor parking. There have been a couple incidents with an angry resident, so please do not use any driveways to turn around in, trespass, block vehicles, or anything else that might overstay birders' welcome in this neighbourhood.

Remarkably, this is the exact area where an out-of-town visitor photographed a Redwing on Dec. 16, 2013 (though unfortunately not known to the birding public until several months later).

The Redwing was still present through April 14th. The bird is mostly being seen in the holly tree and oaks in the lane behind 3957 South Valley Drive.

The bird has not been seen since April 14th.

Linda Norman found and photographed this Summer Tanager in her New Denver neighbourhood. It stuck around for 8 days but has not been seen since. If it re-appears we will update this report. This is the 4th record of the species for BC.

Posted by Russell Cannings at 1:53 PM No comments: