On the morning of Feb 21-2017, Doug Brown found a singing Sagebrush Sparrow on the Osoyoos Canal Trail. The bird gave good views as it responded to playback. The bird was just north of 74th Street near the first access after the parking lot near Osoyoos Secondary School.

This is one of several birds that Doug Brown has found in the area at this time of year. Doug believes that these birds are probably annual in Osoyoos but they're very early migrants. Due to this fact, the area of sagebrush habitat they prefer, is not widely covered by birders since it is almost completely devoid of birds at this time of year.

Despite multiple observers looking on Feb 22nd and 23rd there has been no sign of the bird.

Posted by Melissa Hafting at 4:01 PM No comments:

At 12:15pm Jeremy Gatten found a Redwing in the holly tree in the lane behind the condos at 3957 South Valley Drive. The bird is singing as well indicating it's a male. This is most likely the same bird that was present at this location on Dec. 16, 2013 and from  Dec 19th, 2015 to April 14th, 2016. Multiple observers got to see the bird and it was photographed.

It is usually seen in the holly tree, opposite to condo #2, in the lane behind 3957 S Valley Drive.

The bird was last seen at this location on April 10th.

Please be respectful of the homeowners in the area, as the bird is down a narrow lane.

This is the third record for the province of British Columbia and an ABA Code 4 bird.

Posted by Melissa Hafting at 12:40 PM No comments:

At 12:45pm on February 7th-2017, Blair Dudeck found and photographed an adult Slaty-backed Gull at the Nanaimo River Estuary. The bird was in a mixed Gull flock along the river near the parking lot on Raines Rd.

At 12:15pm on Feb 8th, the bird was relocated in the same location by Guy Monty. The bird appeared to fly in from the direction of the landfill. The bird was viewed by multiple observers and then flew at 1:15pm.  The gull was lost in flight and no one was able to see which direction it went.

At 8:25am on Feb 9th, the bird was viewed by Garrett Beisel in the same location.

Please be respectful of the First Nations Reserve in the area as Raines Road runs through the Snuneymuxw First Nations Reserve. People should NOT bird along Raines Rd in front of the houses, or stop there. This bird can be viewed from the parking lot at the end of Raines Rd, which is outside of the Reserve, and is public property.

On Feb 18th, Guy Monty relocated the Slaty-backed Gull at the Landfill on Cedar Rd. Located at 1105 Cedar Road.

On Feb 19th, the bird was relocated once again back at the Nanaimo River Estuary. It was viewed by scope off the end of Raines Rd.
On Feb 20-21st the bird was seen back again at the Landfill on Cedar Rd.
This is the second Slaty-backed Gull in the province, during the 2016/2017 winter season.

The bird has not been seen since Feb 21st.

This is the 81st record for the province of BC. 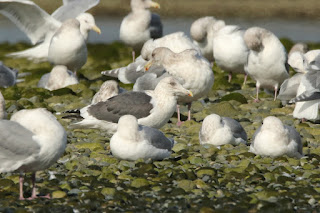 Posted by Melissa Hafting at 8:23 PM No comments: