Posted by Russell Cannings at 5:24 PM No comments: 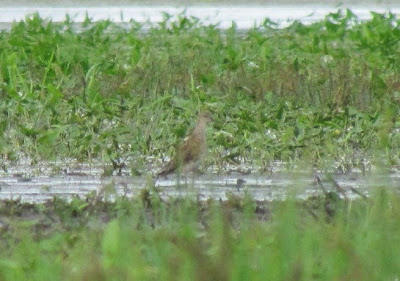 Pantage Lake is at it again!!! After last year's flocks of Sharp-tailed Sandpipers, not to mention the plethora of other highlights from this hidden gem in recent years, Rod Sargent and Adrian Leather scored again--this time with a REEVE! To make matters even more interesting, they believe there were two reeves present, as 2 identical-looking shorebirds flew in with some Baird's Sandpipers but only one stay long enough for distant record-shots.

A "Reeve" is the female version of "Ruff." Typically we see juvenile birds in BC (if at all) but this bird appears much duller overall with black mottling on the flanks (which points to adult female). Summer/fall males (Ruffs) typically show much whiter chests, throats, and lores.

Pantage Lake is located up the Nazko Hwy, NW of Quesnel, and unfortunately is only accessible via private land and canoes/kayaks are required. Still---we can all marvel at the great birds these guys have turned up in only 3 fall seasons! Both golden plovers, White-rumped Sandpiper, 20+ Sharp-tailed Sandpipers, Buff-breasted Sandpiper, Red Phalarope, Arctic Tern....and so on!
Posted by Russell Cannings at 7:39 PM No comments:

On the morning of August 6, Ryan Cathers observed a male INDIGO BUNTING at the following site:

"When you arrive in Tunkwa Provincial Park head down to Leighton Lake Campground (not Leighton north). When you enter the campground follow the road until it forks left and right. On the right side of the fork is that wetland space. The bird was in there and followed back a bit onto some fences that are between Leighton and Leighton North campground."

*There was also a female bunting present but whether it was a Lazuli or Indigo was not confirmed.
Posted by Russell Cannings at 10:41 AM No comments:

GREAT SHEARWATER and SCRIPPS'S MURRELET in BC

Yet again, Paul Lehman and Co. have observed some great birds off BC by taking advantage of some California--Alaska cruises.

On the way back south, they ran into some large concentrations of seabirds near Triangle Island, including a mass of FORK-TAILED STORM-PETRELS numbering close to 10,000 individuals. The species highlight in that area however was a GREAT SHEARWATER that was photographed 111km NNW of Triangle Island on August 5th. This is the second photographed record for BC, and probably the 3rd record all-time (first being one with good supporting fieldnotes).

Posted by Russell Cannings at 9:04 AM No comments:


Found by John Chandler on Aug 4.