At 2:15 pm on Dec 7, 2019 Mike Klotz found a pale bunting which he thought was a Snow Bunting at the Tsawwassen Ferry Jetty.  At 4:15 pm on Dec 8, 2019 Liron Gerstman found the Bunting during a Coastal Waterbird Survey and noticed it was unusually pale.  He sent me photos for a second opinion but I was away from a computer and phone access on vacation. Unfortunately this did prevent me from studying this properly and for getting the word out as widely as possible. Liron did let locals know about a pale Snow Bunting and eight people went to see it.  He also reported it as a Snow Bunting to the RBA and it was placed on the Vancouver page as a Snow Bunting. The bird remained in the same location until Dec 12, 2019. It has unfortunately not been relocated since.

With photographer permission I was able to send a series of photos to several experts including Jack Withrow - Collections Manager at the University of Alaska and to Jason Rogers (who wrote the ABA article on how to identify them). Both of them came back with several reasons as to why it was a female McKay's Bunting. Although we did not have a spread tail shot, we had a spread wing shot which proved diagnostic. Both Jack and Jason saw no reason to consider a hybrid and felt it was a pure female Mckay's Bunting.

Some points they made (shared with permission):

"This bird matches my conception of a female McKay's best, I have no reservations calling it that. In fresh plumage like this it's sometimes hard to assess what the mantle/back would look like once the fringes wear off, but this bird is just too pale to be a male Snow Bunting (even of townsendi) in that regard and almost certainly too well marked to be a "pure" hyperboreus if it's a male (which I don't think it is). The black on the flight feathers is just about gone by the 6th (from outermost) primary (this does not happen on female Snow Buntings), and the outer webs (and tips) of the primaries are extensively white (I think beyond what you would find on a male Snow Bunting), and it's just sorta on the pale end of the Plectrophenax spectrum (e.g., almost no rust on head/neck)."

When I asked Jack if photos were needed of the third retrix to be sure of the ID he said:

"I don't think it's necessary in this case, everything else points towards a female hyperboreus, possibly an adult based on the mostly white pp coverts, seemingly dark primary color saturation, and tail feathers that appear somewhat rounded and not very pointed."

Jack also provided more info on why the bird's wing pattern is diagnostic.

"My sense is that almost no one appreciates how much variation there is in Plectrophenax buntings (there is nearly a complete cline of phenotypes).
...your bird appears to have a wing that matches female hyperboreus best: it has a very jagged/stripped thing going on in the primaries where the black transitions to white (caused by the black extending further towards the bases on the outer vane with a concomitant extensive white edge to the outer vane) unlike all the male nivalis which are far more abrupt in this transition. The primary coverts are duskier at their bases than their tips, a pattern not seen in any male hyperboreus (at least in this series which includes many SY birds), but that matches many of the female hyperboreus quite well... I still think this is more hyperboreus than anything else."

"The spread-wing photo proved especially helpful here. The sharply-pointed scapular centres, brownish "black" areas, dirty white primary bases, mottled primary coverts, and fairly pristine flight feathers in combination safely identify this as a female Plectrophenax. With that established, no female Snow Bunting should appear this white. The outer primaries are extensively light, the secondaries appear immaculate, the outer greater coverts seem to have (at most) a touch of dark at the bases, and there's a strong contrast between the mantle and "back"- this is all consistent with female McKay's. Age is trickier, but I'm leaning toward adult based on feather wear and how white the primary and greater coverts appear to be. I see no reason to consider a hybrid at this point."

This is the third record for BC. 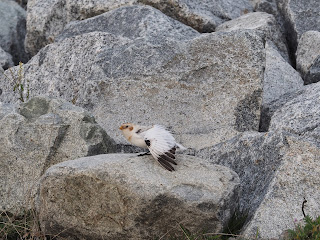 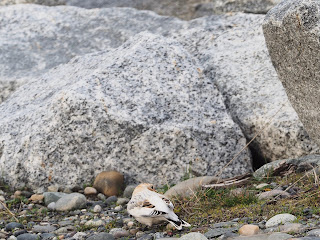 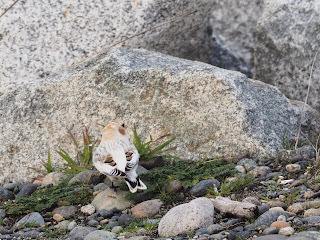 Posted by Melissa Hafting at 3:48 PM No comments: Links to this post

At 1:00 PM on December 6th, Geoffrey Newell found a Red-throated Pipit at Martindale Flats in Victoria. The bird was off the South side of Island View Rd east of Lamont Rd.

He notes "I found the bird at 1:00 PM in the grassy and weedy fields on the south side of Island View Rd east of Puckle Rd. It was last seen closer to McHugh Rd (a little further east). The bird was alone, not with American Pipits, and produced its diagnostic high clear "psssssss" flight call whenever it took flight. This is my 6th Red-throated Pipit in 4 years around Victoria!"

The bird continues as of Dec. 29th in the plowed field on the south side of Island View Rd between McHugh and Puckle Rds.

This is the 60th record for BC.

Erik Milton found a White Wagtail of the Black-backed subspecies (lugens) on Triple Islands Lighthouse, that he mans. The bird was present from Nov 10-13th. The bird was not seen on Nov 14th.

This location is not open to the public.

This is the 15th record for the province of BC.

Posted by Melissa Hafting at 10:56 AM No comments: Links to this post

At 8:30 am on November 11-2019, Darlene Cancelliere found an adult Black-throated Sparrow in her yard. This is not the first rarity to visit her yard. She has also had such rarities as a Black-throated Blue Warbler, Hooded Warbler, Brambling, Sage Thrasher, Dickcissel and Blackburnian Warbler just to name a few.

The home is open to the public at 407 Edward St. Please view the bird from the front yard only and do not enter the backyard. Please be respectful of all residences in the area.

**The bird was rediscovered on Nov 23 and Dec 9 at the same location, both following snow storms**

The bird has not been seen since Dec 9th.

This is the 50th record for the province of BC. 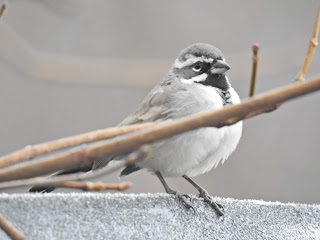 At 12:15 pm on November 10-2019, Alan Barnard and Mike Bentley found an Ivory Gull on Lake Koocanusa. The bird was viewed from 50 feet away with binoculars as it flew by them. They were not able to get photos (didn't have cameras) but had clear views. Their description of an adult all white bird with black legs and greenish yellow tipped bill does not fit anything else but an Ivory Gull. A leucistic gull would be ruled out due to the black legs. The bird kept flying south after their observation and they tried to relocate it for 8 km down the lake in vain but increasing snowfall made them stop.

However, there is an area further down the river that birders should check at Koocanusa Crossing that has open water (not iced over) with plenty of spawned out Kokanee Salmon that could attract the gull.

Map to location of where bird was last seen HERE.

This is the 8th record for the province of BC.

*The gull was not relocated on Nov 11th, despite multiple observers looking over a 20km stretch for several hours.*

Posted by Melissa Hafting at 7:32 PM No comments: Links to this post

At 1:15pm on November 8-2019, Gordon Rowles saw an adult female Brown Booby who tried to land on his sailboat. The bird was HERE about 4 miles south of Victoria and eventually flew off to the SW in the direction of Race Rocks.

This is the same bird that was recently seen in Richmond due to the notch in the same right wing. You can read about that sighting and see the photos of the wing with the damaged secondary feather HERE.

This will be treated as the same record, which is the 18th record for BC. 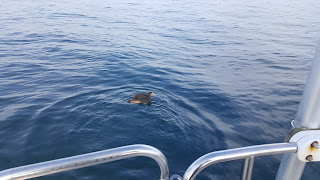 Posted by Melissa Hafting at 2:24 PM No comments: Links to this post

At 1 pm on November 5-2019, John Gordon and Carlo Giovanella found and photographed a Blue-gray Gnatcatcher in a mixed warbler/kinglet/chickadee flock just east of the bridge at Maplewood Flats. The bird has been mostly seen in a deciduous tree with orange leaves just east of the bridge. Its tail is very short and most likely was taken by a predator.

This is the 23rd record for the province of BC.

The bird continues in the same location and was also seen HERE on Nov 15th and has been viewed by multiple observers.

Posted by Melissa Hafting at 1:21 PM No comments: Links to this post

At 10am on Oct 30-2019, Keith Walker found an Ash-throated Flycatcher perched on the fence of his property on Colleymount Rd just SW of Burns Lake.

The location is open to the public. Please contact the RBA for further details.

This is not the first rarity to be had on his property. He has also had an Oriental Greenfinch and Curve-billed Thrasher before.

The bird was last seen on Nov 3rd and has been viewed by multiple observers.

Posted by Melissa Hafting at 11:33 AM No comments: Links to this post

At 12:30 pm on October 19-2019, Laura, Alan and Liz Stewart found and photographed an Ash-throated Flycatcher at Boundary Bay.

The bird was perched near the mansion near 64th St and was actively flycatching.

The bird was relocated HERE on Oct 22nd and was viewed by multiple observers.

Posted by Melissa Hafting at 9:16 PM 2 comments: Links to this post

At 11 am on October 19-2019, Rick Skerry photographed 2 White-faced Ibises flying east over Nicomen Slough in Deroche near Mission.

This is the 47th record for BC.


Posted by Melissa Hafting at 2:49 PM No comments: Links to this post