On the morning of Nov. 15, John Sprague found a Tufted Duck in Outer Ganges Harbour, Salt Spring Island. The bird was floating in a raft of 51 Red-breasted Mergansers, and several grebes. He described the bird as a juvenile.

The bird was about 300 m away near Third Sisters Island, and good scope views were obtained.
Posted by nhentze at 12:34 PM No comments:

On November 9th Geoffrey Newell found a finch near the corner of Beach Dr. and Newport Ave. at the Victoria Golf Course at 12:00 pm. The bird was reported to be very vocal, calling from a tree top and roof top. Initially identified as a Gray-crowned Rosy-Finch, photos that were subsequently posted appear to show an Oriental Greenfinch.

The call heard was described as a "rather soft, yet slightly husky, and obviously finch-like chortle, somewhat like 'prech prech prech' with 3-4 notes together".

The bird was not found during searches on Nov. 11th. 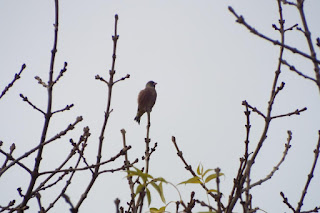 There are six subspecies of Oriental Greenfinch. Only one, C. s. kawarahiba, is generally considered to be able to vagrate to North America owing to its breeding range and migratory habits. Although the photo is poor, the deep chestnut breast and perhaps head pattern seem to fit this subspecies.

This bird was confirmed by the BC Bird Records Commitee as the first confirmed record for the province of British Columbia.

Posted by nhentze at 8:54 PM No comments:

This morning Jim Ginns, Janna Leslie and Paul Graham found a beautiful immature male Northern Parula! The bird was first seen at 9:15 am and was still present when they left at 10:45 am. It was foraging in the birch trees just before the start of the board walk. The bird stayed on the north side of the trail for the most part actively foraging in the birch. Paul Graham photographed the bird.

*Update - The bird has not been relocated on Nov 6th.*

Posted by Melissa Hafting at 4:05 PM No comments:

A Blue-gray Gnatcatcher was found the morning of November 2nd in Victoria near the Chinese Cemetary (at Crescent Rd/Penzance Rd east of Clover Point) by Mike and Barb McGrenere. The bird was seen until about 10:15 am. The bird was in some low bushes at the point before flying north of the point towards some houses and into a pine tree. It was reportedly calling and foraging.

The bird was not relocated on November 3rd.

This is the 17th record for the province of BC.