UPDATE (From Chris Charlesworth): "Chris Siddle first spotted the bird around 10:10 AM beside a small pond in the preserve. Chris & Mike then had it again about 10 minutes later in generally the same spot, near the little wooden viewing deck. I arrived just after they had seen it the second time. We waited around until just after 11:15 AM, joined by several other local birders and the bird reappeared! It was foraging mid-height in the trees." It showed briefly and then was not seen again (as of dusk).

"Today, (9 September) while doing raptor migration monitoring, Mike Toochin and I had great looks at three CHIMNEY SWIFTS from a hill top app. 10 kms northeast of Tumbler Ridge. The birds were visible for app. 5 minutes, and then moved off to the southwest. Absolutely no doubts as to the identification. We also had 11 Broad-winged Hawks and two adult Parasitic Jaegers."

According to e-Fauna BC's "Rare Birds of British Columbia 2008" (Compiled by Jamie Fenneman and Rick Toochin), this is the third report of CHIMNEY SWIFTS in the province. Since there hasn't been a rare birds committee in BC for over a decade, none of these reports have been ruled on. Hopefully that situation will be remedied soon-- the "official" BC list needs an update!
Posted by Russell Cannings at 6:38 PM No comments: 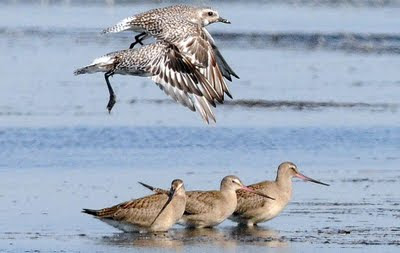 --More details on Vancouver Page
Posted by Russell Cannings at 9:35 PM No comments:

Sept 2--John Ireland and Brian Self just picked out a juv. RUFF near the pilings in between 104th and 96th Street along Boundary Bay.

Also present was the juvenile HUDSONIAN GODWIT and at least 4 RED KNOT.
Posted by Russell Cannings at 7:08 AM No comments: