The Courtenay Citrine Wagtail was observed briefly at 3:30pm on Mar 25 ("L Dea").  The bird is now showing a yellowish wash to its underparts and cheeks.

Brambling Mania has reached the Sunshine Coast with a confirmed sighting in the Gibsons area. Gibsons resident Peter Feichtner spotted the bird roughly a month ago, and local birders John Hodges and Marcia Mason confirmed the sighting February 3rd. This is the second Brambling record on the Sunshine Coast in 40 years of record keeping and the fifth current Brambling record in BC! 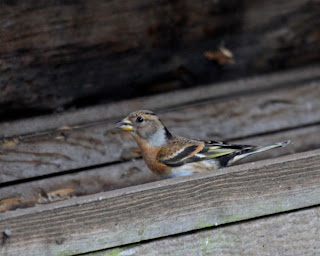