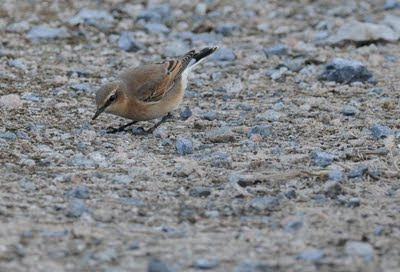 [Photo: Mike Tabak]
This afternoon, a Northern Wheatear was found at Iona Island by Roger Foxall. The bird was located at the intersection of all four ponds, and was still present at dusk. Also nearby was a VESPER SPARROW (locally rare), and a STILT SANDPIPER (first of the season).

SEPT 1 UPDATE: Many birders turned out to try to re-locate the wheatear today but unfortunately they were unsuccessful. With all the habitat out there though, the bird could easily be foraging happy somewhere among the brambles to the north.
Posted by Jer at 7:16 PM