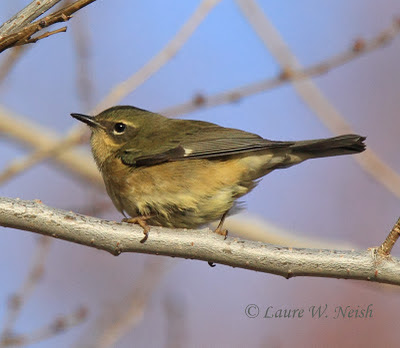 (Dec 18)--Russell Cannings, Jack Somers, Evalyn Wood, Michelle Hamilton, and Grant Halm observed a hatch-year female BLACK-THROATED BLUE WARBLER along the Okanagan River opposite the Penticton Golf & Country Club. It was foraging alone in the thick riparian area known as "Ecommunity Place" (No public access but the bird was viewed from the jogging/biking path adjacent to the woodland).

Directions for those trying for it:

Park along Riverside Drive just north of Hwy 97. Cross over the river on the hwy bridge, then walk south along the west dyke of the river. After passing the driving range--look along the riparian thickets on the west side. Listen for the junco-like call-note. In addition to the thick brush on the west side, the warbler has also been seen gleaning insects off the rocks along the side of the Okanagan River.

For more awesome shots of the bird from Laure, click HERE.
Posted by Russell Cannings at 9:04 PM