This past weekend (April 28-29), 87 birders from around BC and Alberta headed to the outer coast of Vancouver Island to board the MV Frances Barkley on Sunday in hopes of finding some nice seabirds. Not surprisingly, with all those eyes out there, there were plenty of other highlights onshore as well.

First off-- here are some photo highlights, courtesy of Peter Candido:
[Click to Enlarge]
Black-footed Albatross: "Clear for Take-off" 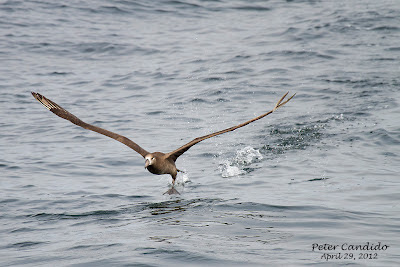 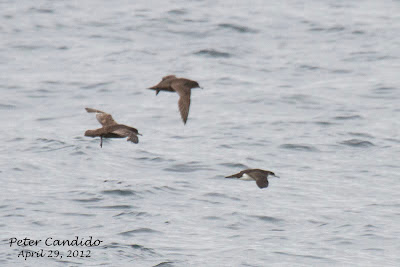 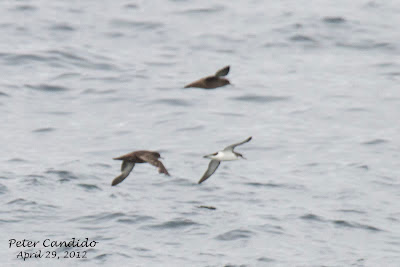 Flock of Red Phalaropes in different stages of pre-alternate moult

The ever-pleasant sight of Sabine's Gulls floating by

For a detailed report of the pelagic trip itself, CLICK HERE.

Other highlights from the weekend:

--Huge numbers of migrating geese; particularly Greater White-fronted, but also Cackling, Snow, and Brant. On the afternoon of the 29th, an estimated 30-40 thousand Greater White-fronts passed north over Tofino, with close to 10,000 Cacklers mixed in.

--The long-staying Yellow-billed Loon was again present around the south end of Tofino Harbour on the 28th and 30th.

--Western Sandpiper numbers seemed low, but there were still lots of other shorebirds around including 25 Marbled Godwits near the Sharp Rd Look-out, 100's of Short-billed Dowitchers at Sharp Road and the Airport, 7 Whimbrels at the Tofino Airport on April 30th along with a single Marbled Godwit, loads of Black-bellied and Semipalmated Plovers, good numbers of Dunlin, Western, Semipalmated, and Least Sandpipers, and over 40 Wilson's Snipe!

--"Rockpipers" were also around, with Black Turnstones and Surfbirds seen at various locations in Pacific Rim National Park, as well as the usual Black Oystercatchers. Another big highlight for many was a good showing of Wandering Tattlers. Multiple tattlers were recorded in Tofino, as well as Green Point area, and around Ucluelet (where they could be heard calling for several hours on the evening of the 28th).

--The Wick Sewage Lagoons yielded a pair of Wood Ducks, 1 drake Cinnamon Teal, 3 Ring-necked Ducks, and a Northern Rough-winged Swallow (among other things)

--Finally, there appears to have been an influx of Sea Otters into the area, as ~10 were sighted off Amphitrite Point on the 28th, and at least 3 were seen from the boat on the 29th!
Posted by Russell Cannings at 3:00 PM