Word has now spilled across the internet that a very intriguing-looking vireo was sighted in Vancouver on the 18th of September, 2013. Well here's what I have collected so far. Please check out the photos and comment if you have any strong feelings to suggest that this is not a YG Vireo.

If accepted, this would be a first record for British Columbia and  the second record for Canada (the first being a specimen collected in Quebec back in 1899!). While at face-value this might seem like an outlandish vagrant, the species is close to annual in September in California now a days and this year saw 12 confirmed sightings including a couple in the San Francisco area.

This from the photographer:

"There aren't really too much in the way of field observations. All i can say is, i saw the bird moving around in a tree, not sure if you can ID the tree from the photos? The bird seemed to stay in under the foliage, not coming out to the front of the tree at all. Which was why the photos are not my best! It stayed in the same tree for maybe 10 minutes, before disappearing into some thick bushes. I spent half of that time photographing the bird, the other half trying to get the attention of my birder friend. Sadly, he believed it to be a Red-eyed Vireo, as you can imagine, as Yellow-green has not been found this far North before. So, we didn't pursue it too much, bad move as it turns out, but sure you understand why?"

*Remember that you can enlarge the photos by clicking on them* 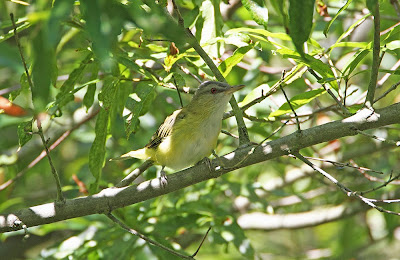 Posted by Russell Cannings at 7:32 PM