At 2:15 pm on November 26th-2016, Paul Prappas, Carolee Colter and Terry O'Gorman found a first year Ferruginous Hawk while driving along Kootenay River Rd, just south of Creston. The bird was hunting in the farming fields on the right side of Kootenay River Road opposite to Speers Road. They were able to watch the bird for ten minutes before it flew out of view.

The bird was seen on December 8th-2016 by Linda Van Damme in a field across from Speers Rd where Paul Prappas had the bird.

At 11:30 am on December 9th-2016, Craig Sandvig et al. relocated the immature Ferruginous Hawk in the exact same location and the bird was photographed.

The bird has not been seen since December 9th. 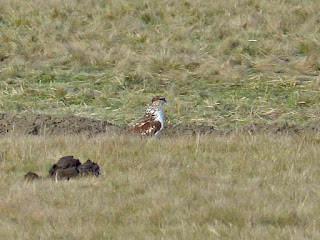 Posted by Melissa Hafting at 7:50 PM