At 8 am on Sept 10th-2017, Darlene and Daryl Cancelliere et al. found an adult Red-headed Woodpecker in Greely, which is 12km East of Revelstoke. The bird was hawking insects from telephone poles near to a forested area beside the railroad tracks and an abandoned farm.

Directions: Turn off Hwy 1, 12 Km E of Revelstoke and follow Greely Road, and you will cross the bridge over the river until you see the railroad tracks by the abandoned farm.

The Red-headed Woodpecker was seen at 7pm in the same location.

This is the sixth record for the province of BC.

Map to the location where the birds were seen HERE

The bird was not relocated on Sept 11th, despite multiple observers looking. 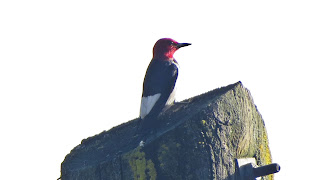 Posted by Melissa Hafting at 4:30 PM