SHORT-TAILED ALBATROSS photographed in BC waters 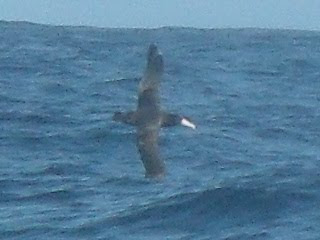 A good sighting anywhere in North American waters, this juvenile was photographed 20km off Vancouver Island near Ucluelet, BC (March 8). The large pink bill distinguishes it from the more common Black-footed Albatross. As they get older, STs will gradually molt into their distinct white and black plumage. Apparently several BF Alberts were out there as well-- also a decent species for early March in BC.
[Report and photo provided by Barie Hotchkiss]
Posted by Russell Cannings at 9:36 AM