An adult winter LESSER BLACK-BACKED GULL was found at the Maude Roxby Bird Sanctuary at the foot of Francis Ave in Kelowna the afternoon of Dec 26 (Chris Charlesworth & Ryan Tomlinson). While very rare throughout the province, this species is now annual in the Okanagan Valley. This represents the first record of Lesser Black-backed Gull in the valley so far this winter. In a late report, we've learned that what appears to be this same bird was photographed on the ice with other gulls at Robert Lk in Kelowna, on Dec 23 (Stu Weir). 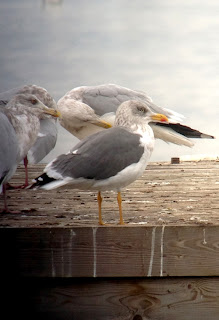 Posted by Chris Charlesworth at 3:05 PM