A Dickcissel was seen and photographed at a Ladner feeder this afternoon. On the north corner of Elliott St. and Chisholm (Douglas Bamford). The bird was relocated in the afternoon of April 21st and 22nd at Chisholm and Georgia around two blocks away at a feeder on the West side of the street and in the trees surrounding the feeder and across the street from the feeder as well. It is still associating with House Sparrows.

April 25/26--Apparently the bird has moved some distance away from the original sighting, where it is frequenting a private residence, not accessible to the public. Will update if any more info arises.

This is the 20th record for BC. 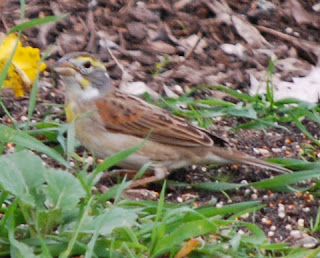