At 11 am on August 7th-2016, Albert Michaud found and photographed two immature Short-tailed Albatrosses. He was conducting a whale survey at the time for the Department of Fisheries and Oceans near Cape Scott Provincial Park which is off the northwestern tip of Vancouver Island. The UTM coordinates of where he spotted them in flight were 50°27'01.9"N 128°32'57.1"W.

This is the second sighting this year of a Short-tailed Albatross in BC waters. The last one was a sight record on June 12th-2016 by Joseph Morlan. Joseph reported seeing an adult Short-tailed Albatross at UTM 50.582614, -128.858638. That location was near to this sighting about 15 miles SSW of Beresford Island, and slightly further SSE of Sartine Island. That bird was viewed from the Grand Princess Cruise Ship. He was unable to get photos during his brief view and there were no other observers. However, he is experienced with this species and his field notes were extensive. 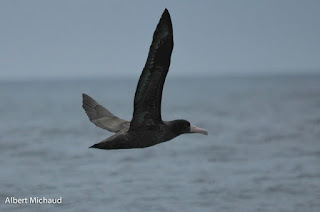 Posted by Melissa Hafting at 9:15 AM