At 7:15am on November 7-2018, Geoffrey Newell found an adult Little Gull at Cattle Point. The bird was flying around with Bonaparte's and Mew Gulls, less than 200 metres offshore. It was last seen heading NE towards Ten Mile Point. A photograph was obtained but the bird has not been relocated since 7:15am. Map to Cattle Point HERE

Upon this news Gordon Hart reviewed his photographs and found he had actually photographed the Little Gull at 2pm on Oct 31-2018 at the same location.

On Nov 8th-2018, the Little Gull was relocated by Cathy Reader at 10:40 am flying around Cadboro Bay. She viewed it off the end of Tudor Ave. It was flying around with Bonaparte's Gulls. It continued throughout the day.

The bird continues at Cadboro Bay as of Nov 9th but was not relocated on Nov 10th despite multiple observers looking.

This is the 99th record for the province of BC. 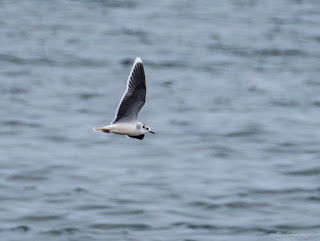 Posted by Melissa Hafting at 10:24 AM