On the evening of June 29-2019, Charles Francis found a male Northern Parula. He first identified the bird by song but didn't see or photograph it. The bird was singing and located 320m from the foot bridge along the Estuary Trail near the mouth of the Quatsesee River. At 2:30pm on July 1-2019, he returned to the same location and relocated the bird singing in the trees in front of him. He was able to photograph the bird as it gave good views for 5 mins, before it flew off. He was unable to determine which way it flew.

He returned on the evening of July 2nd to look for the bird but could not relocate it. 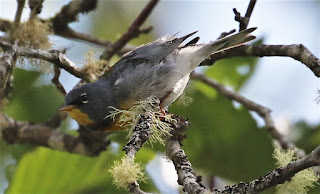 This is the 21st record for the province of BC.

Posted by Melissa Hafting at 6:00 PM