Two new breeding species for BC!

Two new species have been added to the list of breeding birds in BC this year!

Finally a long overdue and suspected species was confirmed - The Lesser Goldfinch!

On July 5-2019, David Bell (the original finder of the species at this location), photographed an adult female Lesser Goldfinch feeding a barely fledged fledgling. The young bird still couldn’t fly. No nest has ever been found but this is enough to confirm breeding. The birds were 100m uphill from the Kruger Mountain/Old Richter Pass Rd intersection in Osoyoos.

This is also the first breeding record for all of Canada.

You can see the photos below: 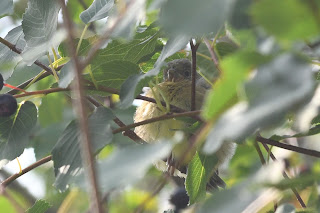 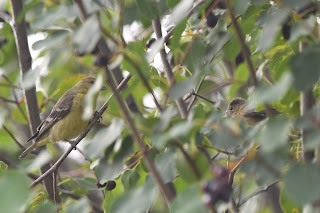 You can read more about these Lesser Goldfinches HERE

Since breeding is now confirmed I will no longer be featuring them on the main page of the bird alert as a provincial rarity.

The other new BC breeding species this year was Whimbrel. On June 20-2019, Syd Cannings, Jean-François Jetté and Logan McLeod discovered and photographed a nest with 4 eggs at the Haines Summit, near the Yukon border. They were found in Tatshenshini-Alsek Provincial Park while looking for Hudsonian Godwits during a bird survey.

You can see the photos below:

Here is a write up that Syd generously wrote up on their discovery:

“On 20 June 2019, we were doing bird surveys along the British Columbia portion of the Haines Highway in the far northwestern corner of the province. Despite being a bit weary after our early morning work, we were all eager to stroll through the big fens west of the highway (in Tatshenshini-Alsek Provincial Park) to search for Hudsonian Godwits. These magnificent shorebirds have been occasionally recorded as breeding in the region as far back as the 1960s, but we wanted to update that information since the Committee on the Status of Endangered Wildlife in Canada (COSEWIC) had recently assessed the species as Threatened.
Off we went through the thick willows and birch scrub, killing mosquitoes as we went. Except for the mountains and the nearby forests, the landscape was reminiscent of the wetlands we had surveyed for godwits on the northwestern corner of the Mackenzie Delta in 2018. There, Whimbrels swirled noisily overhead as the lone Hudsonian Godwit sat quietly below. So as we battled our way through the bushes, I (Syd) said “Wouldn’t it be really cool if we found Whimbrels here?” To my shock, as we entered the large fen and spread out on our godwit search, loud curlew-like calls rang out and J.-F. shouted, “Whimbrels!” A pair of the birds, obviously upset with us, were soon joined by another pair to the south. J.-F. walked around a small copse of White Spruce and came across a nest with four eggs! We didn’twant to disturb them further so kept going through the fen complex to the south, obviously passing through the territory of the second pair. We saw no godwits, although we recalled the advice of a shorebird expert who that they prefer to nest amongWhimbrels and Mew Gulls. The gulls were present here, too, although not in large numbers.
There is one summer record for the region: a single bird was seen at Mosquito Flats on 17 June 1980 (see account in Birds of British Columbia, vol. 3); but this is the first documented breeding record for the province.
The Haines Highway corridor is well known to biologists as a place where arctic and subarctic species have small, disjunct populations. Birds such as Smith’s Longspur and Hudsonian Godwit immediately come to mind, but there are also mammals such as the Tundra Shrew in the region. A special place indeed!The valley of the headwaters of the Tatshenshini River, and the Mosquito Flats area contain extensive peatlands that appear to be great habitat for Whimbrels and Hudsonian Godwits, so there are plenty of opportunities for more discoveries.”

This is definitely exciting news for British Columbia.

Posted by Melissa Hafting at 2:17 PM