At 7 am on May 4th-2017,  Jeremy Gatten was working along the Gingolx (Kincolith) waterfront in the Nisga'a Nation, when he found an adult Black-tailed Gull. He was scanning through hundreds of Mew Gulls just south of the Kincolith River off the north end of Waterfront St, when he spotted a dark gray-backed gull. The yellow bill with black subterminal band and red tip was immediately noticeable to him and he was able to see the bird in flight. Seeing the tail with white base and thick black band surrounded by a thin margin of white, allowed him to confirm that it was in fact an adult Black-tailed Gull. He was able to photograph the bird as well. The Eulachon run ended last month and the decaying fish has brought in thousands of gulls to the Nass River Valley.  He will be in the area for another 4 days and will be monitoring the gull's presence.

This has been an incredible year for provincial rarities for Jeremy. In addition to the Black-tailed Gull, he has found a Purple Sandpiper, Redwing and a Black Phoebe.

The Black-tailed Gull has not been seen since May 4th but very well could still be in the area.

This is the 2nd photo-documented record of Black-tailed Gull in the province of BC. 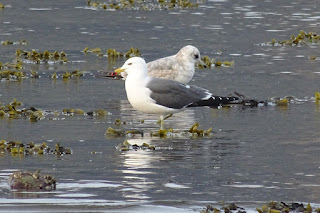 Posted by Melissa Hafting at 8:10 AM