At 10:15 am on May 15-2017, Daniel Donnecke found and photographed an adult male Hermit Warbler at Mount Douglas Park. The bird was singing and was seen on Glendenning Trail. This is a steep trail that heads straight down into the oaks from the parking lot at the summit, which is located at the end of Churchill Dr.

Daniele saw the bird in the area of the trail where the oaks first hit the conifers. The bird was in an oak tree near the first large douglas fir tree, which is located halfway down the trail. It was in a mixed warbler flock consisting of Orange-crowned, Wilson's, Townsend's and Yellow-rumpeds Warblers.

Ann Nightingale, David Allinson and Mike McGrenere relocated the bird at 1:10pm on May 15th. It was between the 2 douglas firs between the tower and the power lines.

Despite multiple observers looking there was no sign of the bird on May 17th.

This trail is very steep and not for those who have mobility issues. The gate to the summit parking lot opens at 12pm.

Map to Glendenning Trail where bird is being seen HERE

**Upon review of new photos (see HERE), the amount of green on the back of the bird concerned me, along with the dark streaks on the bib corner (the area on the side of the chest where the wing tucks in, which is often hidden by the wing) and lower flanks. I have sent all available photos of this bird along with my concerns to a few experts. They were made aware that the photos that concerned me initially were taken in evening light. All information will be sent to the Victoria and BC Bird Records Committee. I will also update the blog with any major developments.

I believe that it is important to be completely transparent and wanted the public to be aware that Silu Wang gave her opinion. She is a Ph.D. candidate in the D.Irwin Lab at UBC and studies Hermit Warblers in the hybrid zone, in the Cascades Region of Washington State. She explained that the bird has a predominantly Hermit Warbler plumage background, but with Townsend's Warbler plumage introgression.  She used the hybrid index based on the eight plumage landmarks as specified by Rohwer and Wood (1998). She was presented with all available photos of this bird and viewed them carefully. She estimated the hybrid index (ranging from 0 to 1, with 0 being pure Hermit Warbler and 1 being pure Townsend's Warbler) and for this bird she felt he should have a hybrid index of 0.12, which is smaller than 0.25 (the cutoff value for Rohwer & Wood 1998 classification). Therefore, based on Rohwer and Wood 1998 classification, it should be a Hermit Warbler.

However, the fact that it has a hybrid index of 0.12 instead of 0 means that it does not have a pure Hermit Warbler plumage, and that there are some traces of Townsend's Warbler introgression.


She noted that on another photo by Liam Singh, showed a greenish wash close to the tail covert see HERE She said that some hybrids only show a greenish upper back, and the fact that the green goes quite far down for this bird, further supported TOWA introgression.

She also looked at the video I linked to above by Geoffrey Newell. In that video she noted that when the bird was preening his crown was light grey, but the grey went quite forward, see screenshot HERE.

She explains that she views this bird as a Hybrid, despite Rohwer and Wood (1998), as stated below: 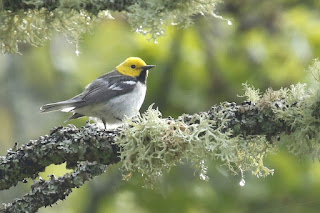 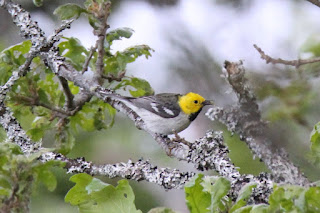 Posted by Melissa Hafting at 12:43 PM