At 7:10 am on Sept 28-2018, Geoffrey Newell found a Red-throated Pipit calling its distinctive call in an American Pipit flock at Gonzales Point located off Beach Drive on the Victoria Golf Course. The bird was heard by Neil Hughes as well ten minutes later. Geoffrey Newell was able to get a visual in flight but the bird was not relocated after this and no photographs were obtained.

At 6pm on Sept 28-2018, Geoffrey Newell found a second Red-throated Pipit half way up the east beach at Saanichton Spit. He was able to get photographs of the bird as well. The bird was still present at 7:20pm when he left and was sitting on driftwood on the beach in an American Pipit flock.

Map to location of bird HERE 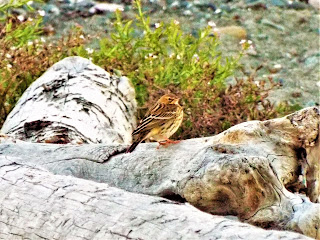 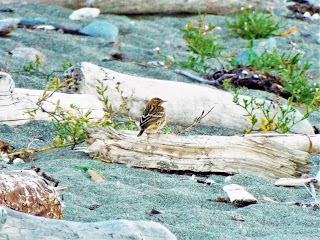 This is the 56th and 57th record for the province of BC.
Posted by Melissa Hafting at 9:17 AM